MEDOWIE
THE PLACE OF THE TALL TREES

01 January 2020   PROGRESS update / Vale Geoff Dingle
What a cracker of a Progress meeting on Monday 25Nov2019, to end the year. The meeting started with Cameron and Charles [Council] + Louise [RFS] talking about emergency services, bushfire management and preparation. Then we had a report from Councillor Chris Doohan, with much discussion on the following topics:  Other topics discussed were:  Since our Nov19 meeting, two more "contributor" webpages have been setup, and with each new webpage the value of our Medowie Community Website (MCW) as a community asset continues to grow as more content is added and viewed:
Thank you to all who have supported Medowie Progress throughout 2019.

On a more sombre note, yesterday Geoff Dingle passed away after a long illness. Geoff, a former MPA president, was a community stalwart with his contributions and commitment spanning many decades in many ways; Geoff gave his all to the community he loved. Our thoughts and prayers are with Libby, family and friends who miss Geoff's presence, contribution and leadership. The photo of Geoff and other MPA members is from our 2015 farewell to Rob Wilkinson.

For many [way too many] the end of 2019 and the start of 2020 has not been happy due to the ravaging bush fires. Our thoughts, prayers and giving go out to those affected, as well as to the firies, police, SES, Councils, neighbours, and all others who are fighting, serving and supporting all the communities impacted by and in the line of fire. Thank you all.

Medowie is no stranger to fire.
After evacuating from the Oct2013 Medowie bushfire [thankfully our home was saved due to the efforts of firies + experienced and brave neighbours who called in the firies] I received some wise counsel from ABC radio presenter Helen Clare: "be kind to yourself"; if more can do this then, perhaps, 2020 can be a year of being kinder to each other. 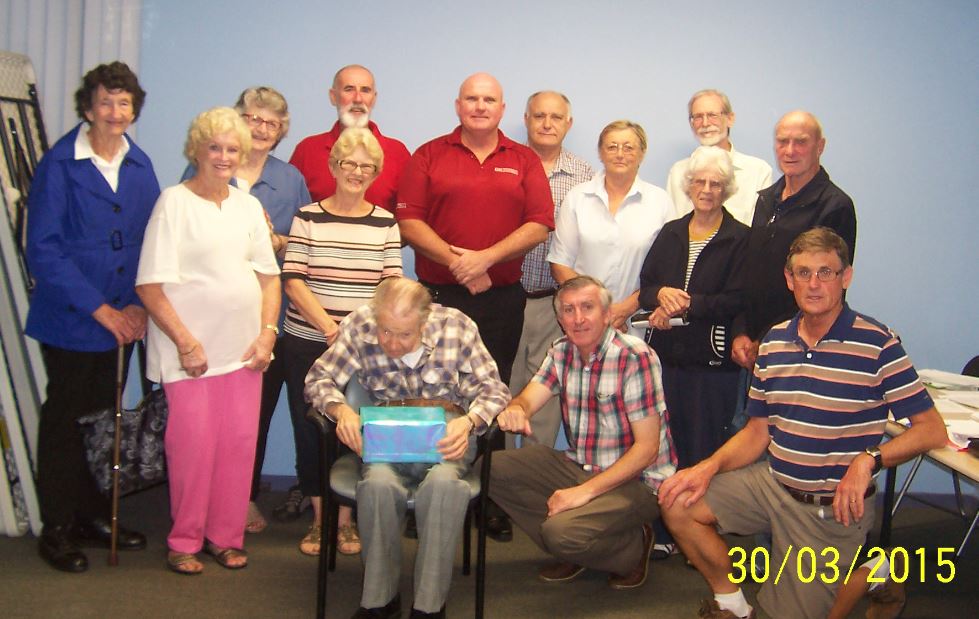 ​
​Discussion topics for General Meeting on 25 November 2019
In addition to regular meeting topics:

[1] the Emergency Management Coordinator from Port Stephens Council is attending to talk about new Council initiatives including:
[2] following discussions with NSW Ambulance (Service Planning), we will explore the prospect of an Ambulance Station for Medowie (and its location) as Medowie is near the top of the list in their next submission for funding.

[3] On public exhibition https://www.portstephens.nsw.gov.au/your-council/about-council/public-exhibition are: [4] Port Stephens Council is currently preparing a Local Housing Strategy (LHS) which will be placed on public exhibition in the first half of 2020. The LHS will set out Council’s vision for housing over the next 20 years. The LHS aims to ensure suitable land supply, improve housing affordability, increase diversity of housing choice and facilitate liveable communities.

After discussing the proposed Service Station DA [for the west side of Medowie Rd, 150m north of the Ferodale Rd roundabout] at the July19 progress meeting, I contacted Council staff to ask why this DA had not been put on public exhibition given that it was a development of Council owned land + it was “likely to be of significant community interest” + it was a “Council project above $100,000”; refer PSC-DCP page A13: http://www.portstephens.nsw.gov.au/grow/development-controls-plans-and-strategies/dcp

With the support of Cr Chris Doohan, the proposed DA has again been advertised in the Examiner and submissions called for; but it still has not been put on public exhibition, which is surprising given that a proposed Service Station at Williamtown is currently on public exhibition: http://www.portstephens.nsw.gov.au/your-council/about-council/public-exhibition.

In any case, the documents associated with the proposed Medowie Rd Service Station [over 200 pages] can be viewed at: http://datracker.portstephens.nsw.gov.au via the SEARCH option; reference# 16-2019-339-1 [address 795 Medowie Rd]

AS PER PSC INSTRUCTION:
“Should you wish to contact council to make enquiries regarding applications displayed on the website, please contact council either by email Developmentand.BuildingAdmin@portstephens.nsw.gov.au, phone 02 4988 0255 during normal office hours or in writing to 116 Adelaide Street,Raymond Terrace NSW . All correspondence should be addressed to the General Manager and quote the relevant application reference number.”

It has been reported at recent Progress meetings that Council has an updated Traffic Study for Medowie, yet the proposed Service Station DA still references 2009 data from a 2012 study.

Given the proximity of the proposed Service Station (and workshop) to the Medowie Rd / Ferodale Rd intersection and proposed Town Centre;
+ prospect of traffic lights at that same intersection in the future [not discussed in any of the reports] as well as future expansion to 4 x lanes ;
+ the prospect that the a significant portion of Medowie’s vehicle movements will come from the higher density North East quadrant of Medowie, potentially turning across Medowie Rd (when southbound);
it is reasonable that the Medowie community is provided with up-to-date traffic data & analysis prior to further consideration by Council.

Also, the draft Medowie Planning Strategy http://www.portstephens.nsw.gov.au/grow/local-area-planning-strategies/medowie-strategy states on Page 3 [Planning Framework] that the Town Centre Master Plan is complete … but clearly this is not the case, as the Town Centre diagrams are out of date when viewed through the lens of current development proposals.

The reports associated with the proposed Medowie Rd Service Station state (based on 2009 traffic movements) that traffic delays will be acceptable up until 2029 [a decade away]. Given that that the draft Medowie Planning Strategy has a 20 year focus, what assurances can Council provide, beyond the next decade, that traffic flow in and around our town centre will not be constrained by the proposed Medowie Rd Service Station?

When this DA was first highlighted a few months ago on a Medowie Community Facebook Group, many of the hundreds of comments questioned if this Council owned land would be better utilised for other purposes; eg. a police or ambulance services? As a result of those questions, and discussion at Progress meetings, I contacted Kate Washington MP with that same question. Kate has approached the relevant Ministers seeking advice about future plans for police and ambulance infrastructure for Medowie.

It is therefore reasonable for Council to take on board State Govt input in regards to the best use of Council (community) owned land [once that advice has been provided] + the updated traffic data + a finalisation of the Town Centre Master Plan [costed], in addition to community submissions; before further considering this DA.

Of course, without community submissions the DA is likely to be passed, and Medowie residents will have to live with the result of that. So, I encourage everyone who desires free flowing traffic [and other Town Centre considerations] to be factored into Council’s decision process to put in a submission by the 25th October, as per the instructions above. In the experience of Medowie Progress, only a significant volume of individual submissions is likely to get a better outcome for Medowie; ie. petitions and template letters are treated as 1 x submission … so it is best for everyone to submit in their own words, with their own concerns.

As the proposed Medowie Rd Service Station DA has not been put on public exhibition, I encourage you to share this information with other residents who have an active interest in the future of Medowie.

We will be further discussing Town Centre development at our 28th October & 25th November meetings, along with the other Progress Items: https://medowie.nsw.au/mpa-progress-items.html